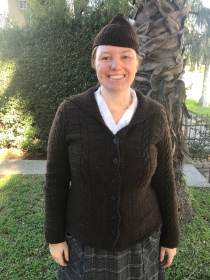 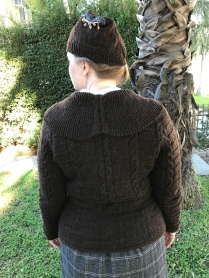 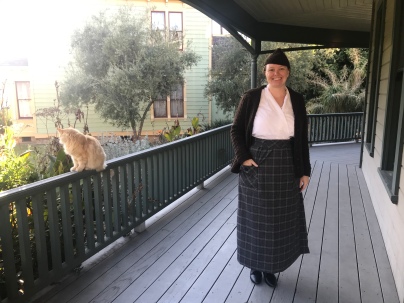 And now for the knitting from Lamplight 2018.

This yarn was my Rhinebeck splurge. I saved for the trip for months and I couldn’t afford to buy a lot so I had to really be choosey. I landed on this so soft and warm Cormo Cross that my Rena recommended. The color was perfect for my Lamplight costume, but I also wore this sweater all winter. The biggest problem was time. I had to sew a whole costume AND knit a shawl collared sweater in one month. Thank goodness I got it done! The hat was less successful. In an ideal world I would have had tons of time to swatch. But that just wasn’t my reality so the hat is much much less slouchy than intended. Oh well. I was plenty warm and cozy for the night time program. Too bad I had such a hard time learning lines last year. Ugh. Much too big a part for my meager acting skills. This year I’m requesting a part with a much more manageable amount of speaking! 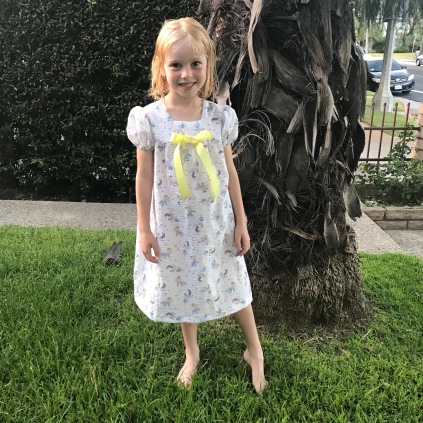 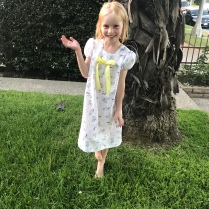 A sweet little nightgown I made last year for those hot summer nights. It has a teenager girl listening to records printed all over and the yellow ribbon matches the girl’s yellow hair. It’s been worn many time since I made it even though my girl has grown a lot this year. My sister found the pattern in a thrift shop and it was just perfect. Size 4, but with added length it fit Lu well at 6 years old and still fits well more than a year later. 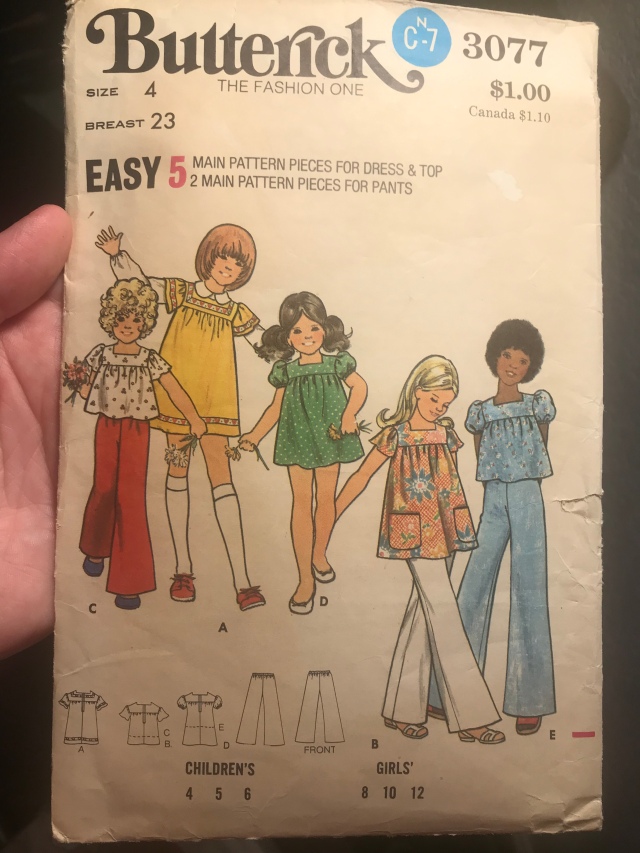 Yay! I managed to fit in another project this month! I surprised the hell out of myself by knocking out one more thing this afternoon. To be fair it was more of an alteration, but I think it counts just the same.

Last month I posted my plan for the Sewcialist‘s tribute month. To summarize, I’m paying tribute to Mrs. Mole from Fit for a Queen by altering a much too small skirt to fit my current figure. Like, the skirt was 7-8 inches too small in the waist. Whoops!

Success!!!!! This turned out to be a really simple and fun project.

First I took the old waist band off very very carefully as the silk is so thin the seam ripper could easily slice right through. Then I folded the skirt in quarters and turned to my trusted copy of Patternmaking for Fashion Design to find out the waist radius for my current waist size. A quick snip to enlarge the waist and I was on my way.

The next step was to insert a side zipper. The original dress had a front waistband that wrapped around the back and hooked, then a separate back waistband wrapped to the front and tied. There were 5 inch openings on each side to allowed room to pull the skirt on. I closed one of the side openings and enlarged the other to make room for a zipper. I used an invisible zip because that’s what I had on had, but a lapped zipper also would have worked well. 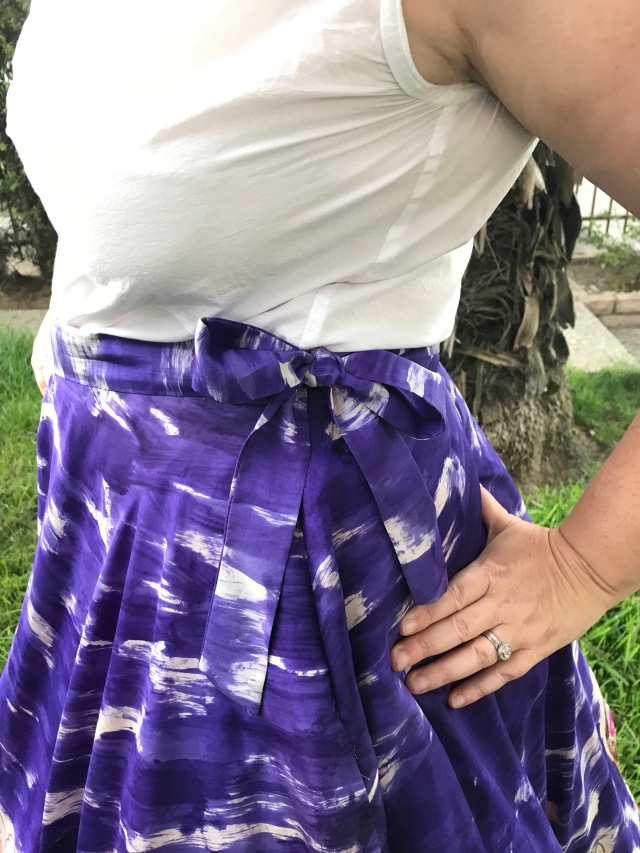 I discarded the original front waistband that hooked because it was too short to reuse and stabilized with a material that would have been hard to find today. The back waistband/tie was gloriously long! I picked up some purple silk organza at The Fabric Store (the same outing as my previous LACMA excursion) and inserted a double wide length into the new waistband to stabilize the original silk. Lucky me, the silk pressed like a dream and the original 60 year old creases made sewing the new waistband to the skirt very very easy. It was shocking how nicely those creases agreed with the alteration process. I hand stitched the waistband down on the inside and now all the raw edges are completely inclosed.

The only problem is figuring out where I can wear a hand-painted Mexican silk skirt with piggy banks. Church? Date night? Work? Back to School Night? It is totally fabulous and feels wonderful in this summer heat, but it is a lot of look if you know what I mean. And should I stick with the white blouse? I’m kind of tempted to whip up something in hot pink or teal instead. A simple Cashmerette Springfield might work without overwhelming the beauty of the skirt. Anyone want to throw out an opinion? In the meantime I’ll keep playing dress up and spinning around my yard.

After going silent for a couple of years the Sewcialists are back and holding tribute months on their site. While I’ve been helping out a tiny bit behind the scenes I will not be a contributor this month. And that’s a good thing because we just returned from vacation this evening and I haven’t even started my project for Tribute Month. For August, sewing bloggers and Instragrammers will be picking another sewer as their inspiration and complete a project in tribute. However, having just returned to town and the summer heat I’m taking a slightly different path. Instead of sewing a project from scratch, my tribute project will be all about altering an existing garment.

Ever bought a garment only to find out it is a tad bit smaller than you’d expected? HAHA! Yeah. It happens to the best of us. Enter Mrs. Mole from Fit For a Queen. She writes a blunt, hilarious, and informative blog about her business altering bridal gowns and other garments. It is my very favorite blog because I learn from her techniques, but also have to laugh at all the poor decisions and delusional behavior some of her clients exhibit.

For Sewcialist’s Tribute month I dug back into the closet to find a too small garment to alter. I have about a dozen beautiful but tiny things tucked away that I cannot bear to give up to the donate pile. Some of them would take major re-working, but I don’t have time to tackle a big project. I ended up choosing this stunning 1950s Mexican handpainted silk skirt.

I have zero recollection where I acquired this purple pig adorned beauty, but it is in excellent shape. No holes, perfect stitching, and just one tiny rust stain that no one would ever notice except me.

Size 14 in the 1950s is not exactly the same as today’s size 14. That’s probably where my  problem began. I would guess I found this skirt either online or in a vintage shop, saw the size, and then assumed it would fit. Or maybe it did actually fit. Either way this sucker is best suited for Marilyn Monroe’s waistline over my current waist circumference. I need to add 7-8 inches. 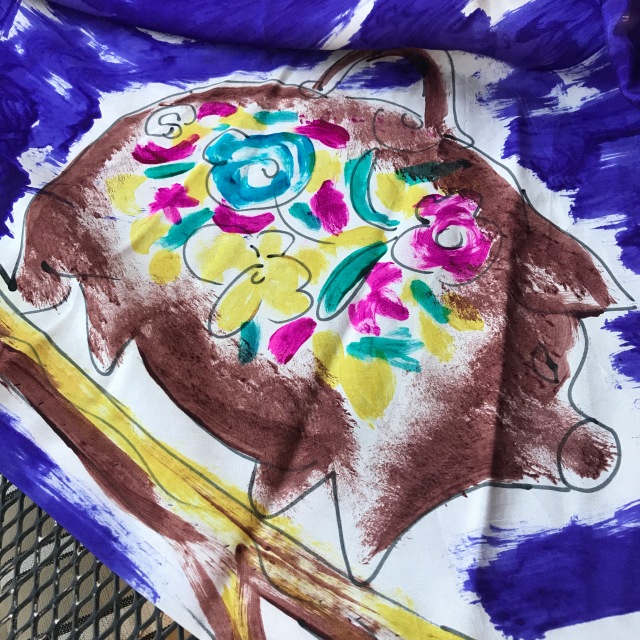 So here is my plan.

I’m hoping the hem won’t need to be re-done since it is so perfect, but I can always re-access once steps 1-3 re completed.

What do you think? Am I ruining a precious item? Do you also find Mrs. Mole’s writing hilarious? Are you making a tribute project as well?

After feeling frustrated by my recent attempts at making woven dresses, I took a step back. What pattern has fit me the best? Could I work with it? Well I thought on it for a while and determined the Gertie dress I made a few months back is still my favorite. Light as air to wear and with a good fit. It only needed a few tweaks. So I’m saying goodbye to the Upton pattern for now. Maybe, just maybe I need to stick with misses patterns and grade out rather than starting with plus patterns. Worth trying!

So I put on my Gertie dress to access the fit. Lots of little tweaks, but nothing huge.

Looks like a lot, but most of these were easy to accomplish when re-tracing the pattern. Then I conquered an adjustment I’d been mulling over for a while. A narrow back adjustment as outlined in this Threads Magazine article.

Now, one would normally use something like muslin fabric or something purchased cheaply, but I’m running low on wadder fabric. I used my Liberty! 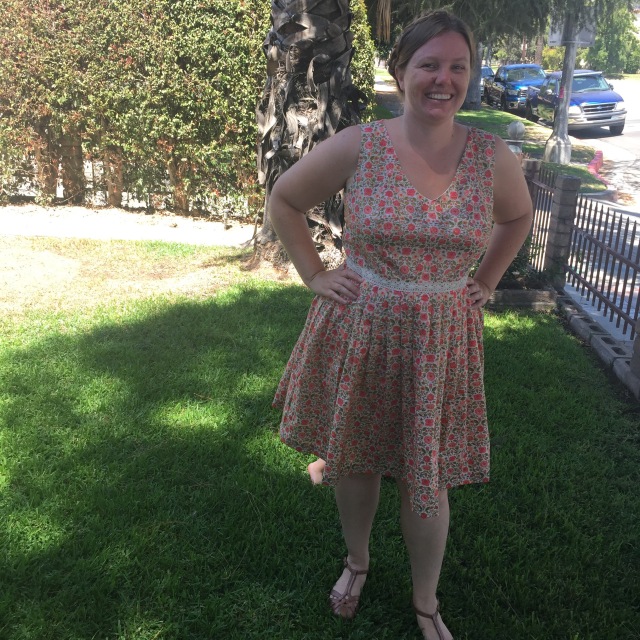 It worked! Well, not quite! The finished dress is beautiful, but it turned out I’d over done lowering the bust darts! I had to rip it all apart to redo them. In the end that worked out well because now I have custom fit darts.

I’m thinking I might take that approach more often. These are some of my most successful darts and it wouldn’t be terrible hard to do. I could just sew the top and bottom of the side seam then try on my dress and pinch out the darts as I wanted them. 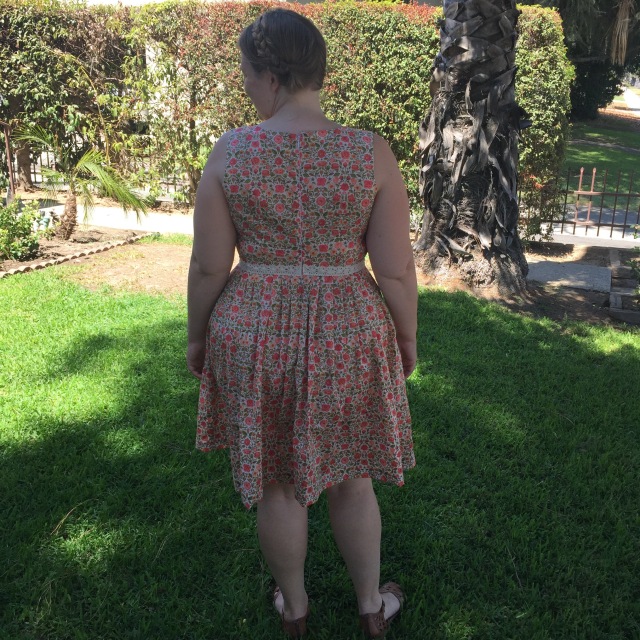 This was supposed to be a muslin to test my newly re-drafted bodice, but then when the darts were all wrong I couldn’t bear to fix the darts and then rip this all apart to trace off the pieces. I guess that’s what happens when one decides to test new ideas with Liberty of London lawn. This stuff is too expensive and dear to rip apart, but I love all my stash fabrics too much to make a wadder.

I ended up picking this yardage piece because it had been sitting unloved for too long. It was only 2 yards of Penrose Rose (color D) I purchase on an Massdrop a while back. Part of me wanted to see if I could get a whole dress out of such a small piece and I’m thrilled that I could! 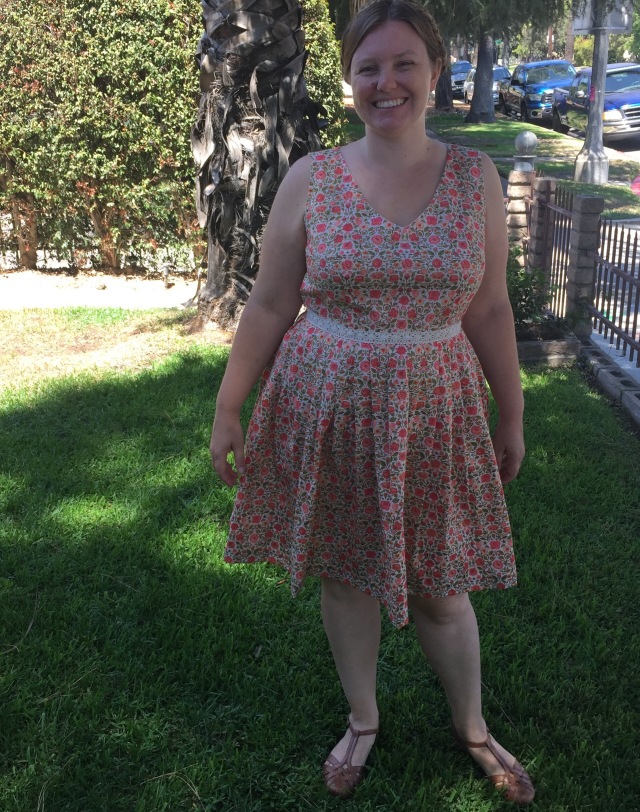 One of the other issues I encountered was a lack of lining fabric in my stash. I seriously need to pick up some nice lawn to have on hand! I dug around a found a few scraps of ivory lawn left over from my 1912 dress. It wasn’t enough to make the all in one facing I’d planned. It wasn’t even enough for bias tape! But the awkwardly shaped scraps were just enough to make some very narrow facings. 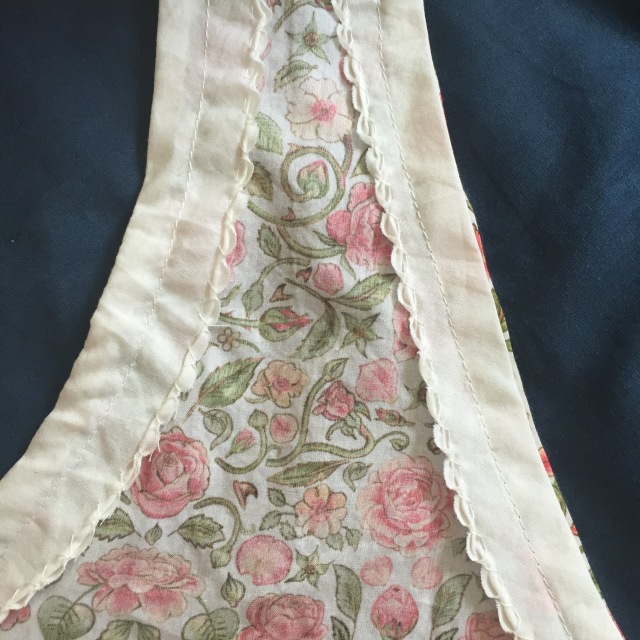 These worked perfectly and do not flip out the way full sized facing usually do.

The other issue I encountered was when I finished the dress it looked too plain. It was just a simple thing with a whole lot of patterned fabric. I dug around through my lace scraps and found a length of antique cotton lace that was leftover from a 1930s dress I made years ago. It definitely made this dress look less homemade. 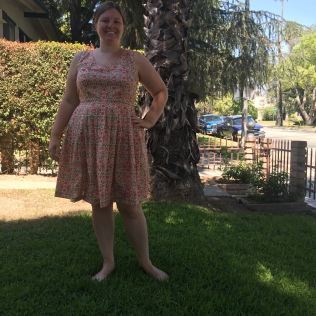 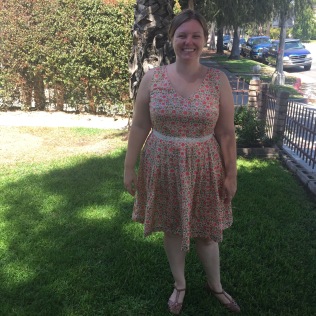 Lastly for the skirt I took the leftover yardage after cutting out the bodice pieces and determined I could just eek out a skirt that came to the top of my knees while still being able to line up the subtle striping pattern at the side seams. it also means the skirt is a full 100 inches wide! So wide! To keep the width from becoming overwhelming without a petticoat I pleated the fabric using my own fingertip as a guide on how large to make each pleat. 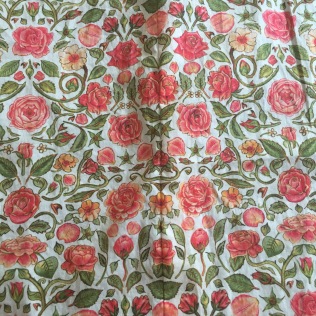 I’d thought about making a less wide skirt, but I didn’t want to have an awkward piece of fabric leftover. In retrospect I could have used the leftovers to make bias tape, but now that the dress is done I am so glad I went for the super pleated skirt.

Since I finally have a dress I love I’m trying to decide what to make next. I wanted to make a shirt dress this summer, so maybe that should be next. While I ponder I have a couple quick knit things to make. What do you all think I should tackle next?