Okay, this was THE MAJOR PROJECT of spring! Heritage Square holds a fashion show and tea every spring. In previous years I worked the event, but this year I asked if Lu and I could walk in the show. Then I lost my damn mind and spent way way way too much time trying to figure out something that met the theme that also worked for our ages and was a known mother/daughter duo. I also needed to find something that was achievable.

I ended up finding 5 or so options and then asked the organizer which she preferred. And she was very unhelpful by telling me to choose. Darn it! In the end I selected Jeanne Lanvin and her daughter Marguerite.

Here is the fashion plate I selected. 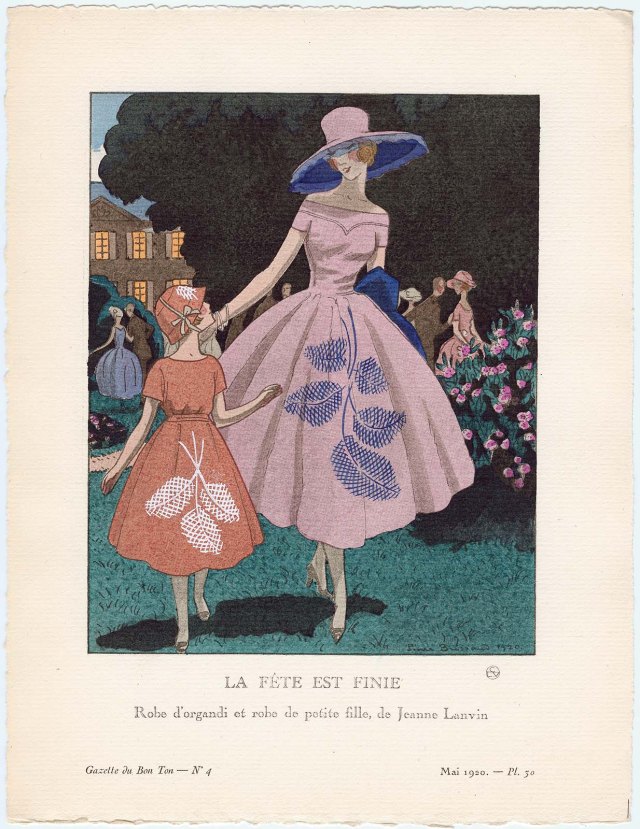 From the Museum of Fine Arts Boston

And here are our finished ensembles!

I’m pretty darn proud of how nice our dresses look. Not exactly like the original design, but certainly close enough for real life. 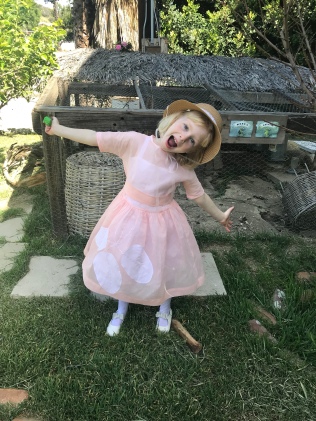 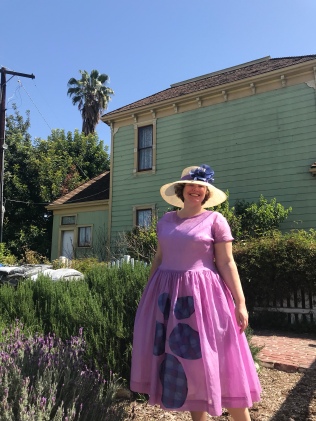 I drafted both dresses from a basic bodice. Lu’s was based off the bodice block in the Building Block Dress. I used the pattern I fit for Christmas and then added cut on sleeves. It is a little tight to get her arms in, but it works! Then I added a densely gathered skirt. Mine is based off my sloper with a very slightly dropped waist. I’m sure on a slim woman there would be no bust darts and the waist would be lower, but I altered those things to better suit my figure. I love trying to be historically accurate and making clothes fit is an accurate direction to go. People have always preferred clothes that look nice!

I also drafted Lu a simple slip to wear underneath. I used cotton lawn for the top and organdy for the skirt. Jokes on me though, organdy is…sheer! I had to go back and line the slip with more lawn. On the plus side the slip organdy was a freebie my boss brought me years ago. She was so pleased to hear I’d used it. I had enough to do both our slips, but mine is not fully lined I think. My memory is kind of foggy on the details at this point. I made my entire ensemble in less than a week and did not have the time to sweat the small stuff!

Both dresses are made with organdy I ordered all the way from India. I’ve never ordered fabric from so far away, but I found the recommendation on Historical Sewing and figured Jennifer wouldn’t recommend a crummy business. Pure Silks‘ website was a tad clunky, but they had organdy of various stiffness and in colors, glorious COLORS! The prices were also really good even with international shipping.

Our ensembles were topped off with hats I purchased off Amazon. I had such anxiety over hats. Finding the right shape, color, and size is so darn tough, but I haven’t learned to make my own yet. So two plain straw hats were ordered and then I trimmed them to match our ensembles.

I’m most proud of the appliqué on the front of the dresses. I had planned to do it by hand, but that would have been so time intensive. A friend suggested appliqué and she was so right. Much more realistic in a time crunch. I used left over baptism dress fabric for Lu’s and some silk organza from Renaissance Fabrics on mine. Then I embroidered the stems by hand.

My mom (and two of my aunties) were able to attend the fashion show and captured this sweet video. Lu had such a blast that she is already thinking about next year. And I’m so happy to see my girls love the museum as much as I do. Next year maybe Chi Chi can join us? 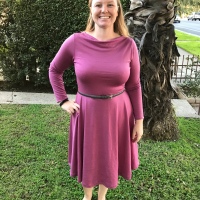 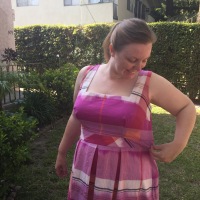