Let’s talk about Colette. Their pattern block is somewhat less than desirable for a large portion of the sewing crowd, but several years ago there weren’t as many competitors on the indie scene. Like many others I purchased a few Colette patterns. I loved their vintage inspired esthetic.

Then I made these patterns and they were pretty much flops. I blamed myself. As a largely self-taught sewer I figured I just didn’t have the skill. Now I know that I am not alone!  Colette patterns are notorious for their wide shoulders, odd sleeves, and flat butts. Ahhhhhhhh. It all makes sense now.

I am by no means an expert, but I think I do okay at getting things to fit. I like to experiment, but last year I got really fed up. You see, I attempted to make Colette’s Dahlia. Gosh I love the way the pattern looks on the original model. I’m linking the sew-a-long because Colette has changed the pictures on their site.

But making the pattern proved to be very frustrating. I’d searched pattern reviews and only found nice versions! But when I put on my finished dress the shoulders were so big they stood up and touched my ears. I was dismayed. I was upset. I knew someone who had made the dress and her’s turned out great, but mine was unwearable.

So I gathered the neckline, turned the binding under, and then stitched it all smaller. I still hated the dress. Pissed off and disappointed I threw Dahlia in a corner and forgot about it…until today.

I pulled it back out because I was going to use the skirt fabric along with my leftover yardage to makes a blouse! But I thought I should try on the dress one more time and photograph it. I put the dress on and well, it looks pretty good!

I mean sure, it’s not perfect. The neckline looks pretty crappy, but a cardigan is going to hide all those sins. Still a little wrinkled in these photos, but not bad over all. I remembered I really liked the skirt and waistband! 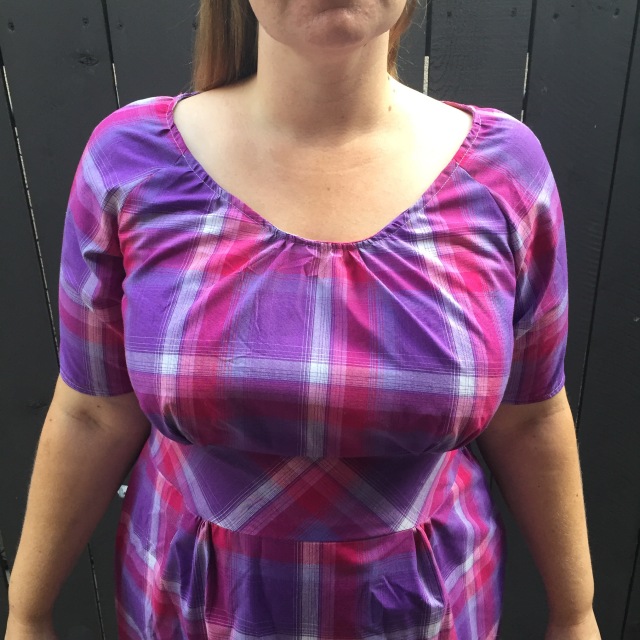 I have zero memory about what size I made or what alterations I made to the pattern. None. Oh well. I’m unlikely to try this pattern again anyways.

I do remember this fabric.

I’d bought it at Michael Levine’s for maybe $5/yard. It was labeled 100% cotton, but it probably a cotton/poly blend. I really need to throw a slip on underneath so the fabric glides more freely! But another reason this fabric stands out in my mind is because as I was watching Modern Family I saw Cam wearing a shirt from the same fabric!

For now I’m just happy to come to peace with my version of Dahlia. It’s not what I originally wanted, but far from the wreck I saw in the mirror last year. 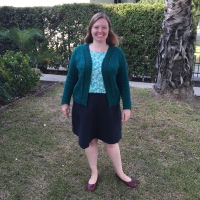 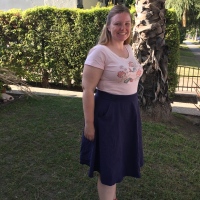